We took the Polaris Ranger for a ride in the Targhee National Forest, following Dan’s cousin Tim and Uncle Mike on their dirt bikes. They know this wilderness like the back of their hands, giving me more of a sense of comfort for this adventure. Uncle Mike made fun of me for wearing my ski/snow gear on this trip in May, but he and the other three were the ones who came back wet and cold. This trip involved crackling thunder and lightning, hail, and rain that stung because we rode through it really fast. There was one point where Tim and Mike waited for us at the bottom of a hill when I realized and freaked out that it was actually a steep 20ft cliff and made Dan drive back to where we came from. If we followed through, it would have been a straight nosedive to the bottom. I’m pretty sure I saved the Ranger from major damage, but the guys claim that it would have been fine….!? Whatever. We crossed many creeks/cricks and squeezed onto a bridge that was so tight on the tires that it bent a rim. We went full speed through mud puddles, one of which happened to drench us completely by surprise which was okay, because I had on my waterproof snow gear. Mike even showed us an awesome waterfall that Dan never knew existed. I also made a video of Mike crossing another creek, and it happened to be the time he would tank it, submerging his whole bike underwater. Tim and Mike got it out and used their tools to take the engine apart and get the water out. A good samaritan came by and gave them a bottle of engine oil with which to replace the current tank that had been mixed with water. We could have driven around much more, but it was time to head back with a now-temperamental motorcycle.

It was fun listening to Mike talk to other people on the trail – he is full of stories, including one about the winter when his snow machine quit on him on the side of the hill and it took him 8 more trips back to bring it back, mainly because it would snow another 6 feet in between each visit. I’m slowly learning to overcome my fear of things (or, really, it’s not fear, it’s just that I’m not DUMB, right?!!) going wrong in nature by understanding that it is the obstacles that make adventures memorable. I think a lot of map studying and general knowledge would help, too. (like, should we take an avalanche class if we snowmobile a lot? Do I need bear spray?)

It was great making it back to the cabin to be greeted by four happy dogs (only three pictured) and having fun new stories to tell the in-laws and Aunt Clyda. 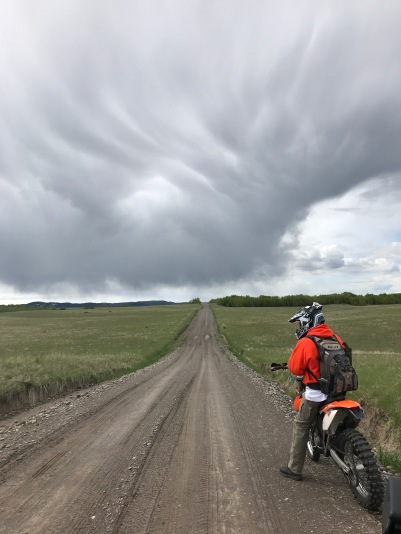